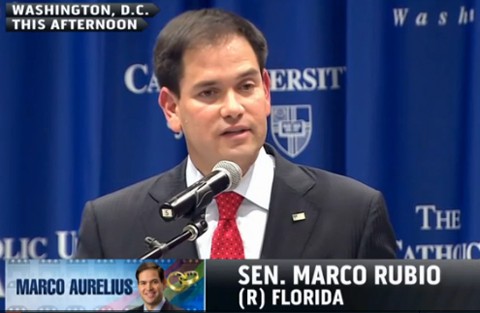 In what should be regarded a part of a years-long run-up for his inevitable U.S. presidential campaign, Republican Florida Senator Marco Rubio proved his conservative credentials in a speech he made at Catholic University in Washington on Wednesday.

During the speech, Rubio parroted the conservative talking points of how opposing same-sex marriage doesn’t make one anti-gay and how gays are “intolerant” toward people who support so-called “traditional marriage.”

“I promise you even before this speech is over I’ll be attacked as a hater or a bigot or someone who is anti-gay. This intolerance in the name of tolerance is hypocrisy. Support for the definition of marriage as one man and one woman is not anti-gay, it is pro-traditional marriage.”

Noting President Obama didn’t declare his support for gay marriage until 2012, Rubio said, “If support for traditional marriage is bigotry, then Barack Obama was a bigot until just before 2012 election.”

Of course Rubio's point about Obama is partly disingenuous both because Obama supported it back as early as 1996, and when he refused to support same-sex marriage earlier in his  presidency, marriage equality supporters repeatedly criticized him for it.

Soon, Rubio took a different conservative tack in his speech by acknowledging the actual existence of anti-LGBT discrimination. But he then continued in a conservative vein re-iterated the disproven notion that “the ideal setting for children to grow up is with a mother and father,” adding that heterosexual parenting “deserves to be elevated in our laws.”

MSNBC has more from Rubio:

“There was once a time when our federal government not only banned the hiring of gay employers, it required contractors to identify and fire them,” Rubio said. “Some laws prohibited gays from being served in bars and restaurants and many cities carried out law enforcement efforts targeting gay Americans.”

Rubio also acknowledged that many gay couples “feel humiliated by the law’s failure to recognize their relationship as a marriage." … He said he respected those arguments as well as the rights of states to recognize same sex unions…