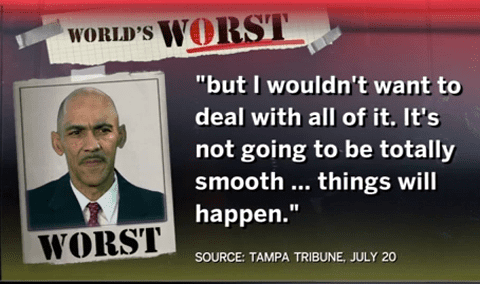 Former NFL coach-turned-NBC analyst Tony Dungy released a statement on Tuesday clarifying remarks that made headlines this week in which he suggested that he would not have drafted Michael Sam because of his sexual orientation.

Dungy released the statement to ProFootballTalk which reads, in part:

I was not asked whether or not Michael Sam deserves an opportunity to play in the NFL.  He absolutely does.

I was not asked whether his sexual orientation should play a part in the evaluation process.  It should not.

I was not asked whether I would have a problem having Michael Sam on my team.  I would not.

I have been asked all of those questions several times in the last three months and have always answered them the same way—by saying that playing in the NFL is, and should be, about merit.

The best players make the team, and everyone should get the opportunity to prove whether they’re good enough to play.  That’s my opinion as a coach.  But those were not the questions I was asked.

What I was asked about was my philosophy of drafting, a philosophy that was developed over the years, which was to minimize distractions for my teams.

I do not believe Michael’s sexual orientation will be a distraction to his teammates or his organization.

I do, however, believe that the media attention that comes with it will be a distraction.  Unfortunately we are all seeing this play out now, and I feel badly that my remarks played a role in the distraction.

Keith Olbermann released a commentary last night ripping Dungy for his remarks and naming him the "world's worst person".