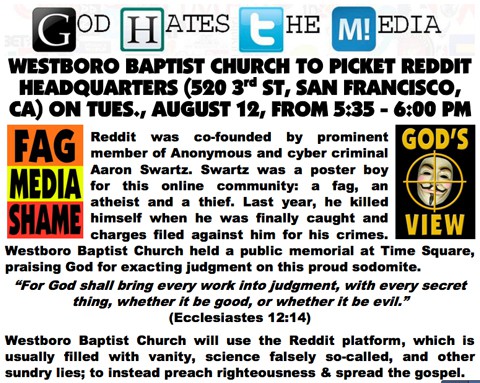 Reddit was co-founded by prominent member of Anonymous and cyber criminal Aaron Swartz. Swartz was a poster boy for this online community: a fag, an atheist and a thief. Last year, he killed himself when he was finally caught and charges filed against him for his crimes. Westboro Baptist Church held a public memorial at Time Square, praising God for exacting judgment on this proud sodomite.

While the WBC may know Swartz as a "fag," Swartz was actually bisexual and eschewed sexual labelling altogether. A documentary about the famed hacker premiered earlier this year.

Just before their protest, the WBC will also hold a Reddit AMA (ask me anything), adding "Westboro Baptist Church will use the Reddit platform, which is usually filled with vanity, science falsely so-called, and other sundry lies; to instead preach righteousness & spread the gospel."

A fourth Westboro member defected this last May, two months after the death of the church's founder Fred Phelps.