Wingnut Bryan Fischer has accused Barack Obama of using the MH17 tragedy to “advocate for the normalization of sexual deviancy.”

Wingnut Bryan Fischer has accused Barack Obama of using the MH17 tragedy to “advocate for the normalization of sexual deviancy,” reports On Top Magazine. 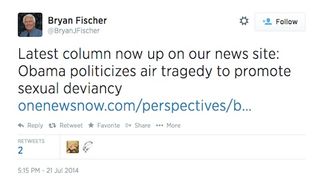 Referring to those on MH17 who were on their way to the AIDS 2014 conference in Australia, Obama said:

“In this world today, we shouldn't forget that in the midst of conflict and killing, there are people like these. People who are focused on what can be built, rather than what can be destroyed. People who are focused on how they can help people they've never met…[the United States] is going to continue to stand for the basic principle that people have a right to live as they choose, that nations have the right to determine their own destiny, and that when terrible events like this occur, the international community stands on the side of justice and on the side of truth.”

However Fischer, head of hate group the American Family Association, told his Focal Point radio listeners that the president was using the tragedy “to advance the normalization, the legitimization, of homosexuality.  President Obama politicizes this event to turn it into an opportunity to advocate for the normalization of sexual deviancy.”