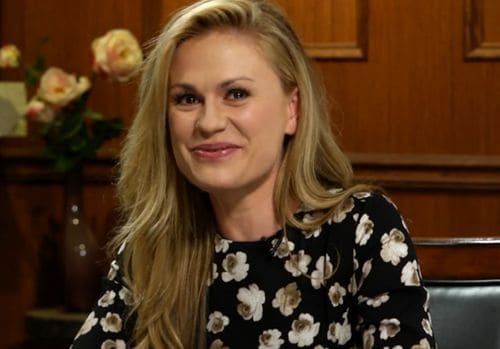 Anna Paquin has been open about her bisexuality for years now, so it is no surprise that Larry King might ask about her sexuality and marriage to True Blood co-star Stephen Moyer. Still, King's line of questioning verged straight from a discussion of vampire Bill's multiple partners on the bloody, sexy HBO drama to a couple of painfully awkward questions about Paquin's own sexual interests. The endearing star came out of the interview all the better for her honest and articulate responses, but one cannot help but cringe a little.

King: Are you a non-practicing bisexual?

Paquin: Well, I mean, I am married to my husband and we are happily, monogamously married, so…

King: But you were bisexual?

Paquin: I don't think it's a past-tense thing. Are you still straight if you're with somebody? If you were to break up with them or they were to die it doesn't prevent your sexuality from existing.

Paquin: I'm just saying it doesn't really work like that.

You can watch the full interview from Larry King Now on Hulu.

Previous Post: « Swedish Electro Artist iamamiwhoami Has A Message In A Bottle For You: VIDEO
Next Post: Church Of England Faces Legal Challenge After Blocking Job Offer To Married Gay Priest »