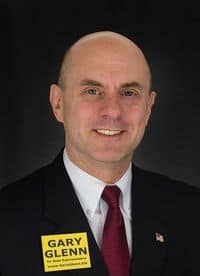 Gary Glenn, president of the American Family Association of Michigan, has won a GOP primary for a seat in the Michigan state House this week, Right Wing Watch reports:

Glenn was a prominent supporter of Michigan’s 2004 constitutional amendment banning marriage equality and was a big backer of his “very special friend” Mike Huckabee’s 2008 presidential bid. As the head of the American Family Association’s Michigan affiliate, Glenn has pushed any number of extreme anti-gay positions.

Among those anti-gay positions:

Glenn will face off against Democrat Joan Brausch in November for the seat being vacated by State Rep. Jim Stamas (R).