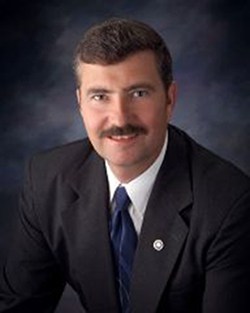 Just after 3 a.m. Tuesday morning, Billings, Montana Mayor Tom Hanel cast the deciding vote against a proposed non-discrimination ordinance (NDO) that would have protected Billings residents from discrimination based on their sexual orientation, gender identity or gender expression. The Billings Gazette reports on how the 6-5 city council vote went down:

Hanel said he applied a standard from Rotary International to help him reach his decision: “I needed to ask myself, is this fair to everyone, beneficial to everyone? Will it build goodwill and friendships? I can’t say for sure,” he said of the NDO.

Shaun Brown, another council member who opposed the NDO, specifically opposed a provision in the ordinance “that would have prohibited discrimination in public accommodations — namely, restrooms and locker rooms” and “alternates that would have allowed for monetary damages to people successfully arguing they were discriminated against.”

The debate on the NDO seemed to drive a wedge between many in the Montana community. Denis Pitman, another “no” vote on the NDO commented that he was disappointed “how much this issue has divided the council and the community.”

Supporters of the NDO meanwhile were disheartened by the measure’s defeat. Said Shauna Goubeaux, who along with her wife Nicole have challenged Montana’s same-sex marriage ban,

“My wife and I own our own home, and we’re employed by companies that are open and embracing” of their marriage, which occurred in another state, she said. “Our lives aren’t as impacted, but the lives of our friends are impacted by this vote.”

Bill Cromley, one of the five council members to vote in favor of the ordinance, told the council before Hanel cast the deciding vote, “There is a gay agenda. They want to be treated as real human beings.”

Cromley’s remarks did nothing to sway Hanel’s opinion that Billings is not ready for an NDO that would protect its LGBT citizenry. Hanel’s final advice to the crowd as the 8 1/2 hour meeting drew to a close was to “walk out of here as professionals”:

“We were all created equal,” he said. “If you can’t sit by someone who disagrees with you, shame on you.”