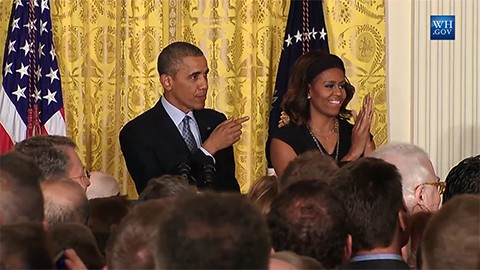 Bresciani is the publisher of AmericanProphet.org

In a blog post titled The Perversion and Terrorism Connection – Modern Man’s Ball and Chain, Bresciani wrote that "homosexuals see injustice on every level of society because they are not fully accepted and their normal is seen by most as damaging perversity. They don’t realize that the more their plight becomes accepted as the norm, the closer the rest of the world is in danger of judgment."

Making the link between gay people and terrorism, he argued that "the days of warning about judgments due to perversion are over, these judgments have already begun and terrorism is part of it."

Bresciani continued that Barack Obama's liberal interpretation of the bible is "a satanically inspired lie" which "has already cost close to sixty million bodies lost to abortion, untold numbers of good minds have been lost to godless academia’s hidden agenda. Character and what remains of the human heart have been hijacked by the morally repulsive trends of the pop-culture generations top voices and all that remains to be stolen and usurped is our very eternal destinies."

Arguing that St. Paul would disagree with Obama, he says that the President "is a pompous politician and former community organizer who prior to his run for president accomplished virtually nothing of any notable significance" who dismisses "the words of [St. Paul] as obscure and not worth taking seriously."