Maxim Sergeyevich Martsinkevich, the leader of the virulently homophobic Russian vigilante group Occupy Pedophilia has been sentenced to five years in a penal colony 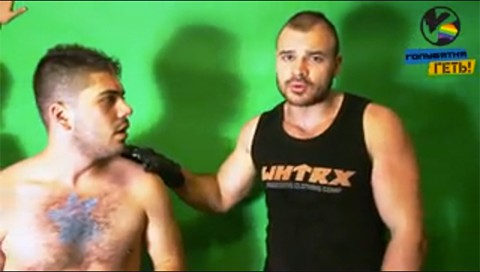 Martsinkevich rose to international attention in 2013 when Occupy Pedophilia began posting videos documenting a campaign of violent attacks on gay men who had been lured to meetings using the social network VK.com.

In many of the videos, Martsinkevich is seen forcibly shaving victims’ heads, pouring urine on victims and forcing them to perform sex acts with objects.

The group claimed that the men they attacked were seeking to have sex with boys.

Amid international outrage, the prosecutor’s office in what was then Sevastopol, Ukraine sought to arrest Martsinkevich for crimes against a young male adult citizen of Ukraine. Martsinkevich fled to Cuba last December but was arrested and extradited for breaking Cuban immigration law in January.

Nine other members of the group are currently awaiting trial for allegedly “committing crimes under several articles of the Criminal Code,” including organization of an extremist community and membership in an extremist community, beatings and other acts of violence, the threat of murder and causing grievous bodily harm, intentional infliction of moderate bodily harm, torture and robbery.”

Martsinkevich was convicted of inciting and fomenting cases of extremism by posting videos on VK.com that contained racial slurs and extremist opinions on Russia’s state of the union. However, videos containing anti-gay statements and homophobic abuse were not included in the case.

Watch a disturbing BBC report on Occupy Pedophilia, AFTER THE JUMP…

Previous Post: « Christian Blogger: LGBT People And Barack Obama Are Responsible For Terrorism
Next Post: ‘Ex-Gay’ Stephen Bennett: ‘Anyone With A Brain’ Is Against LGBT Equality – LISTEN »