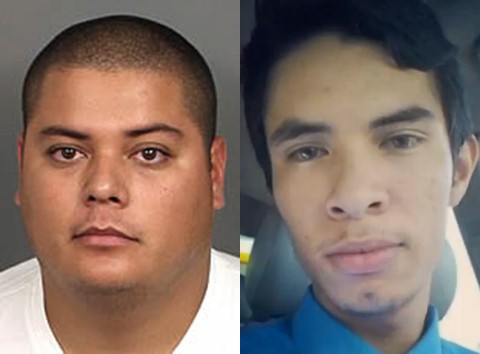 According to KESQ News, on Sunday July 13 Ceballos texted his brother Sergio asking him to come outside and help bring in pizza that he had brought home for his family. Soon after, Sergio heard two gunshots and went outside to discover his brother dead.

Juan was the oldest brother to five siblings. Since he was murdered right outside his family’s doorstep, the family moved away immediately after his funeral. At their new place, Juan’s mother keeps a candles lit by several of his pictures in the living room.

KESQ News reports that the criminal complaint against Ramirez says that he “waited for Juan outside his home and shot and killed him because of his sexual orientation.” Juan worked two jobs and was also a student who wanted a career so he could keep helping his family.

The Bilerico Project shares Sergio thoughts on the pointlessness of his brother’s murder:

”If it was because of that, that was a stupid reason… he said that he was he was looking for happiness in a world full of evil, maybe he was right. The world is full of evil, and I just don’t know why they ever did this to him… He was our guide, everything that we have now, we owe it to him…I’m going to continue with all this, but I’m going to have to do it without him.”

Though Ramirez has plead “not guilty” to murder, he also faces hate crime and lying-in-wait charges. He is being held without bail until he returns to court August 11. The local district attorney may seek the death penalty.