Sociology Professor Mark Regnerus has published a new study which aims to demonstrate that pro-LGBT Christians are more likely than anti-LGBT Christians to support polygamy, abortion and casual sex. 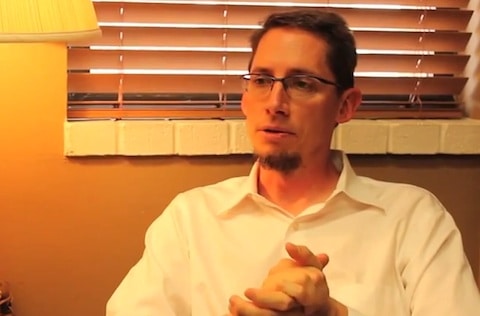 Discredited anti-gay "researcher" Mark Regnerus, who previously claimed that children of gay parents had higher rates of life problems compared to those raised by heterosexual parents, has published a new "study" which aims to demonstrate that pro-LGBT Christians will lead to an immoral, sexually unrestrained world, reports GLAAD.

An internal audit of Regnerus’ previous study of same-sex parenting concluded that it barely studied gay parents, contained no original research, had a “highly unusual” timeline with an “unseemly rush to publication” and that all three of the report's peer-reviewers had ties to the anti-gay Witherspoon Institute that funded the study to begin with.

According to Regnerus, the survey asked respondents to indicate their level of agreement or disagreement with seven statements:

2. It is a good idea for couples considering marriage to live together in order to decide whether or not they get along well enough to be married to one another.

3. It is OK for two people to get together for sex and not necessarily expect anything further.

4. If a couple has children, they should stay married unless there is physical or emotional abuse.

5. It is sometimes permissible for a married person to have sex with someone other than his/her spouse.

6. It is OK for three or more consenting adults to live together in a sexual/romantic relationship.

The University of Texas at Austin sociology professor reports that "there is a pretty obvious fissure between Christians who do and do not oppose same-sex marriage. More than seven times as many of the latter think pornography is OK. Three times as many back cohabiting as a good idea, six times as many are OK with no-strings-attached sex, five times as many think adultery could be permissible, thirteen times as many have no issue with polyamorous relationships, and six times as many support abortion rights."

In a Box Turtle Bulletin analysis of Regnerus' new study, Jim Burroway says that Regnerus, interprets a chart provided without context and few caveats as follows: 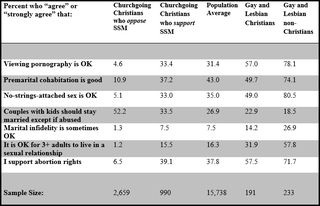 Burroway goes on to provide his own explanation for Regnerus’ findings:

Those who oppose marriage equality are much more likely to be the kinds of busybodies with Deeply Held Beliefs about how other people should live their lives. They may say they they oppose pre-marital sex, extra-martial sex, no-strings sex, and getting divorced despite having children — for other people — but they will wind up doing those many of those Very Bad Things themselves at rates rather similar to, and in some cases (divorce, for example) higher than many other people, despite what they may say in a survey.

Conversely, those who support marriage equality are more likely to have a healthier, more laissez-faire attitude toward how other people order their lives, and they tend to be much less judgmental of other people. And gays and lesbians, who have experienced a lifetime of busybodies giving them unrealistic, unsolicited edicts in how to order their lives, are the most reluctant of all to turn around and do the same to others. And what about the Population Average? Well, nobody likes a busybody.

Watch an interview with Regnerus on his previously debunked study, AFTER THE JUMP…