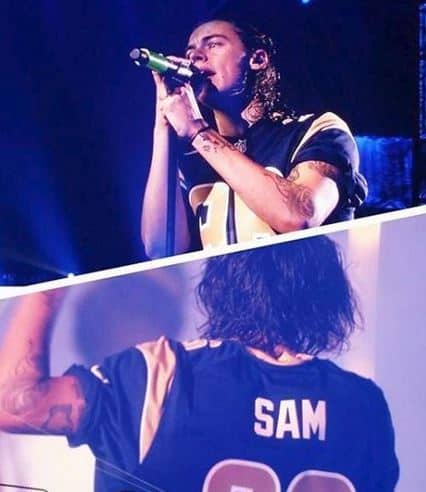 One Direction's Harry Styles showed off his support for Michael Sam and the LGBT community at the band's show in St. Louis last night – donning the openly gay football player's No.96 Rams jersey on-stage to the cheers of fans.

Tweeted Sam this morning in response:

@Harry_Styles thank you for your support!!! #RamNation

Tonight's match-up between the Rams and Miami Dolphins is the last opportunity for Sam to demonstrate his abilities before the team finalizes its season roster.

Previous Post: « Joan Rivers Rushed to Hospital After She Stops Breathing During Surgery: REPORT
Next Post: The OXD Mirror: Close Out Your Summer With New Music From Bondax, Midnight Pool Party, Tesla Boy and More »