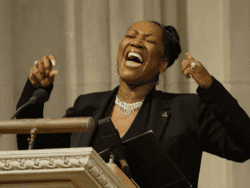 Patti LaBelle, The Godmother of Soul, will be joining the cast of American Horror Story: Freak Show this fall according to TVLine.

Set in 1950s Jupiter, Florida, Freak Show, as its name suggests, will focus on a series of mysterious murders centered around one of the few remaining side-show attractions in the country. Rather than singing, LaBelle’s character will delve into the truth about the “secrets of Twisty the clown killer.”

Listen to the stars of American Horror Story: Freak Show drop hints about the upcoming season AFTER THE JUMP…