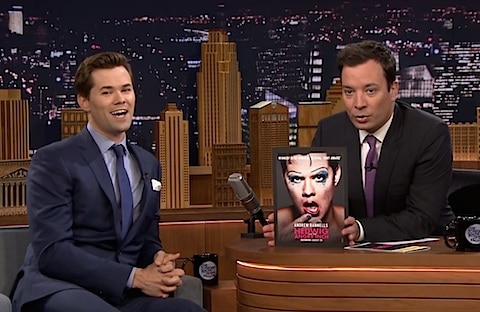 Andrew Rannells, who is set to take over as East German transgender rock star Hedwig in the Tony Award-winning Hedwig and the Angry Inch on Broadway for a limited 8-week run, sat down with Jimmy Fallon on The Tonight Show on Wednesday night.

Rannells, who is a Broadway veteran having performed in Book of Mormon, Hairspray and Jersey Boys, expressed excitement at taking over the lead role from Neil Patrick Harris. Rannells tells Fallon that he has already performed as Hedwig in an unrelated 2002 production in Austin Texas.

Rannells also talks about perfecting an East German accent for the role, and notes that while that's not going so well, he is becoming good at an Australian accent, particularly if he is required to say the name 'Jennifer Lopez'.

In other news, Harris is counting the days he has left in Hedwig down on his glittered fingernails.