Rick Scarborough, the founder of homophobic Christian organization Vision America, has said that it is a miracle that god has not destroyed the U.S. since President Barack Obama started appointing gay ambassadors 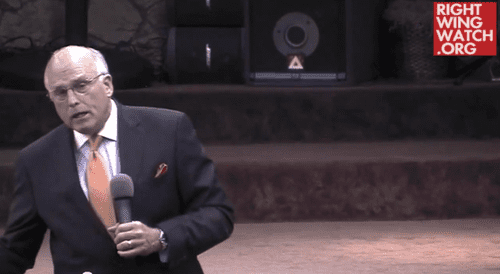 Rick Scarborough, the homophobic Vision America founder and pastor whom even the Tea Party has had to distance itself from, has said that it is a miracle that god has not destroyed the U.S. since President Barack Obama started appointing gay ambassadors, reports Right Wing Watch.

In the newly released video, wingnut Scarborough says that it would be “perfectly just” for god to destroy the U.S. “because we have squandered our grace in this country.”

Agreeing with Islamic fundamentalists who call the U.S. the “Great Satan,” the homophobic pastor demonstrates just how dreadful the U.S. has become by pointing out that foreign U.S. embassies celebrate Pride as well as the appointment of several gay ambassadors by President Obama.

In lighter, related news: last weekend, Daniel Baer, U.S. Ambassador to the Organization for Security and Cooperation in Europe, married his partner Brian Walsh in Vienna.

Watch Scarborough spew his hate, AFTER THE JUMP…