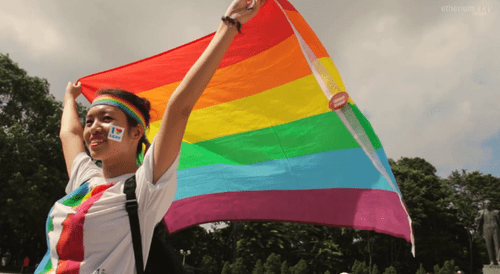 Demonstrations of any kind are tightly controlled in Vietnam, especially following riots in May in protest at China's placement of an oil rig in the South China Sea.

Although homosexuality remains taboo in Vietnam, there have signs of increasing tolerance of LGBT people in recent years including the removal of fines for same-sex wedding parties.  In 2012, the country briefly considered introducing same-sex marriage.

However, one of the parade organisers, Nguyen Trong Dung, said that LGBT people need to be "accepted by their families" before an end to wider prejudice is conceivable.

Check out a promotional video for VietPride 2014, AFTER THE JUMP…

Previous Post: « Ugandan President Says Foreign Pressure Had ‘Nothing To Do’ With Striking Down Of Anti-Gay Law
Next Post: Rick Scarborough: U.S. Should Be Obliterated Because Of Gay Ambassadors – VIDEO »