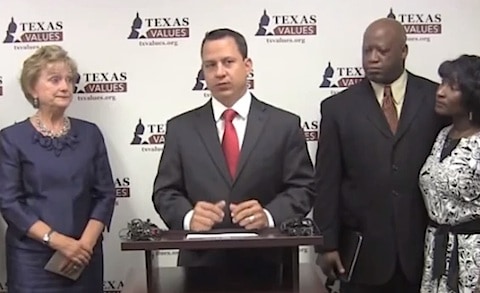 Jonathan Saenz, a virulently anti-gay activist and President of conservative group Texas Values, was divorced in August 2011. Court records recently uncovered by Texas blog Lone Star Q indicate that Saenz' wife left him for another woman just months before he joined that organization:

Saenz, a devout Catholic, has been a right-wing operative in Texas for many years — working on abortion and religious liberty cases as a staff attorney for the Plano-based Liberty Legal Institute as far back as 2005.

However, it wasn’t until recently that Saenz emerged as one of the state’s best-known — and most extreme — anti-LGBT voices.

Court records indicate that Saenz’s ex-wife, Corrine Morris Rodriguez Saenz, is a member of the LGBT community who was dating another woman when she filed for divorce from Saenz in August 2011.

In early 2012, with their divorce still pending, Saenz would take the helm of Texas Values after the organization spun off from the Liberty Legal Institute, where he’d risen to chief lobbyist.

With Saenz as president, Texas Values has led the charge against not only same-sex marriage, but also passage of LGBT-inclusive nondiscrimination ordinances in San Antonio and Houston.

“You will see more attacks on churches than you are already seeing right now and they have already started, because that is the goal to a lot of people, it is not simply to change the definition of marriage but essentially to destroy it and to have a type of sexual behavior being recognized and protected in law that will be to the detriment of our society and to churches across our country.”