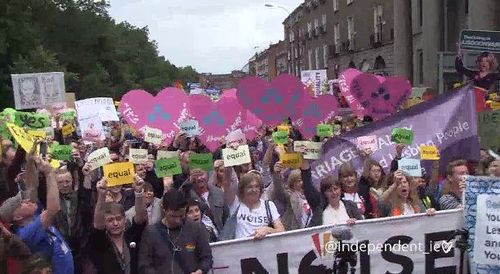 Some dressed in sashes and tiaras after the news that the newly crowned Rose of Tralee, Maria Walsh had revealed she is gay.

The organisers of the march said that hoped this would be the biggest – and last – gathering for same-sex marriage equality prior to a referendum on the issue to be held early next year.

Comedian and writer Tara Flynn, who last week starred in an LGBT Noise video spoofing the “Armagayddon” that sadly some believe will come about if marriage equality becomes law, introduced speakers at the end of the march.

Watch an Independent report, AFTER THE JUMP…

Warning against complacency among supporters of equal rights, Marriage Equality’s Gráinne Healy asked the crowd to check the electoral register to make sure they and their friends and family are registered to vote.

"What we’re asking for is a recognition of a change that has already happened… The slogan I would suggest is ‘if you want a Republic, put a ring on it.’”