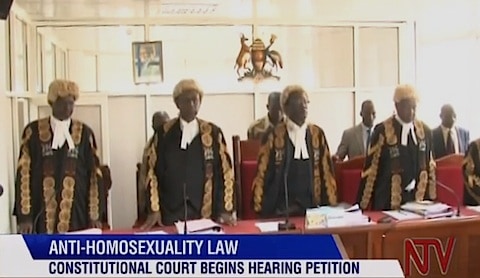 A Ugandan court has invalidated the country's Anti-Homosexuality Bill, declaring it illegal because it was passed by parliament without quorum.

The panel of five judges on the East African country's Constitutional Court said the speaker of parliament acted illegally when she allowed a vote on the measure despite at least three objections — including from the country's prime minister — over a lack of a quorum when the bill was passed on Dec. 20.

"The speaker was obliged to ensure that there was a quorum," the court said in its ruling. "We come to the conclusion that she acted illegally."

The ruling was made before a courtroom packed with Ugandans opposing or supporting the measure. Activists erupted in loud cheers after the court ruled the law is now "null and void."

With the procedural nature of the ruling, activists and petitioners were not able to argue that the anti-gay measure discriminated against LGBT Ugandans in violation of the country's constitution.

Nicholas Opiyo, a Ugandan lawyer who was among the petitioners, welcomed the ruling but said there is still a missed opportunity to debate the substance of the law. "The ideal situation would have been to deal with the other issues of the law, to sort out this thing once and for all," Opiyo said.

A colonial-era law that criminalizes sex acts "against the order of nature," still remains in effect in Uganda, allowing for the continued arrests of alleged homosexual offenders, Opiyo said.

Opiyo also said he expects lawmakers will likely try to reintroduce a new anti-gay measure sometime in the future.