Marina Silva, who is expected to oust Dilma Rousseff as President of Brazil in an October election, has backtracked on an earlier promise to support same-sex marriage 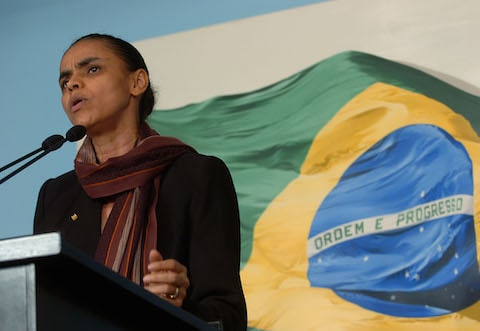 Marina Silva, who is expected to oust Dilma Rousseff as President of Brazil in an October election, has backtracked on an earlier promise to support same-sex marriage, reports Yahoo! News.

Silva is an ecologist and evangelical Christian who holds conservative views on abortion and same-sex marriage.  Last Friday, her campaign team published a manifesto that included a direct pledge to “back proposals defending civil marriage.” However, the following day her team sent out a “clarification” removing the word “marriage” and asserting that she will “defend rights relating to civil unions between same-sex couples.”

Blaming an “editorial error,” Silva said the text published was not the text which had been discussed.

According to Telesur, the new version of the text also substitutes the objective of “eliminating obstacles to child adoption for homo-affective couples" with demanding “equal treatment to couples who adopt.”

However, Silva reiterated that she remains “committed to the defense of the lay state, defence of personal freedom and the respect of religious freedom. The lay state is there to defend the interests of all, the interests of those who believe or do not, independent of their social standing or sexual orientation."

Although Rousseff called Silva's government manifesto “adventurous, obscurantist, and backward,” the incumbent previously backtracked on a plan to distribute anti-homophobia kits to schools.

Watch an interview with Silva, AFTER THE JUMP…