Here's an update to the story involving Tom Wojtowick and Paul Huff, the married gay Catholic couple whose church has sid that, in order for the two to receive Holy Communion again, they must divorce.

The men spoke to the Great Falls Tribune about the discriminatory decision: 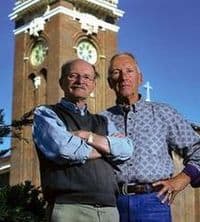 "We're getting old," Huff said. "There is no other avenue for us in the Catholic Church to protect ourselves financially — our Social Security benefits or our home, which is in both our names. If something happened to one of us, we need some protection."

However Catholic officials failed to see substantial significance in such a distinction.

During subsequent discussions with Spiering and several officials from the Catholic Diocese of Great Falls – Billings, Wojtowick and Huff were told that to restore their full lives within the church they must first fulfill three requirements: obtain a civil divorce, discontinue living together and to write a public statement acknowledging marriage as being solely between and man and a women, and admitting they had made a mistake. "I basically said, if this is the way it is then I'm done," Huff said.

The head of the local diocese, Bishop Michael Warfel, visited the church, St. Leo the Great Catholic Church, last weekend. While a large number of people spoke out in support of Wojtowick and Huff, the overall situation remains unchanged.

KULR-8 reports on the bishop's visit:

He spoke for about 10 minutes and heard from a full house from young to old, mainly in support of Paul and Tom rejoining the church. “Gays and lesbians in this country have fought for every civil right; it's time they fought along with us for their faith,” said one speaker.

According to the Billings Gazette, the couple have consulted with lawyers who believe that St. Leo the Great Catholic Church may have violated canon law.

Huff hasn’t returned to St. Leo’s. Wojtowick attends half the Mass, leaving before Communion is offered. Wojtowick believes the couple has a case, saying the actions taken against them are unlawful according to church law.

He has consulted with canon lawyers who agree. But he and Huff are waiting to see what final action Warfel will take in the case before they decide what to do.

However, Rev. Jean Collins at the Episcopal church in Lewistown has invited the men to attend her church where they are welcome to receive Communion.

Watch a KULR-8 interview with Wojtowick and Huff, AFTER THE JUMP…