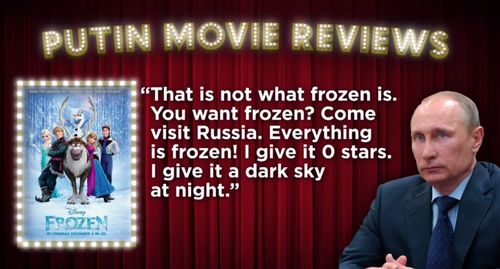 Jimmy Fallon delivered some very real news in hilarious fashion last night, commenting on the proposed boycott of Hollywood films in Russia based on U.S. sanctions and anti-Russian representation. It is undeniably true (and somewhat unfortunate) that the Russian villain has become an archetypical figure in American films and also, as politician Vladislav Grib commented, that "Russian pictures have a hard time reaching the screens and sometimes they are unable to do that at all.” As The Independent reported, a Russian ban could severely impact international box office for American cinema: "Russia's box office is the eighth largest film market in the world."

Fallon seemed to take the news in stride, however, and presented his audience with "Putin Movie Reviews" of popular Hollywood films Frozen, Teenage Mutant Ninja Turtles, and new release, A Walk Among the Tombstones. It's a very funny bit, and they seemed to capture Putin's cynical voice perfectly.