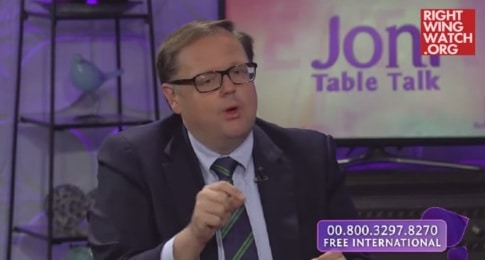 Appearing on the Daystar talk show "Joni" last month, Fox News commentator Todd Starnes felt the need to get some personal woes off his chest and lament the redefinition of marriage at the hands of the gays.

In one segment, Starnes agreed with another guest in saying that same-sex marriage allows for countless other forms of commitments to be made, including a man wanting to marry his dog–all this from a conversation about the Denver bakery that refused to make a cake for a same-sex wedding.

And in another segment, Starnes said that he believes "the government is going to have to start coming after pastors in the pulpit," lamenting the probability that stricter hate crime laws (like the ones censoring anti-gay speech on Christian talk radio in Canada) will make their way to the United States. "I think that we're going to see some pastors who, quite frankly, may have to go to jail to protect their religious beliefs." If that weren't enough, he also throws out the old religious freedom argument, saying: "If I wanted to be persecuted for my faith I would go move to China. I like to live in America where we don't get beat up on the way to church." A classy line coming from someone boo-hooing about hate crime laws.

Check out the videos (provided by Right Wing Watch), AFTER THE JUMP…

Previous Post: « UCLA Study Reveals Hollywood May Not Be So LGBT-Friendly After All
Next Post: Chris Pratt Is ‘Douchemaster McChest’ In Pre-Fame Headshot Circa 2000 »