Right Wing Watch points out a disgusting piece over at the Illinois Family Institute website, in which IFI "cultural analyst" Laurie Higgins writes about her displeasure with the upcoming Banned Books Week – railing against librarians for their "hysteria-fomenting" efforts to prevent the banning of children's books with pro-LGBT content. 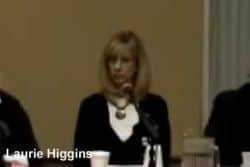 The ALA pursues its hysteria-fomenting goal chiefly by ridiculing parents who, for example, don’t want their six-year-olds seeing books about children or anthropomorphized animals being raised by parents in homoerotic relationships. (Scorn and woe to those parents who hold the now-censored belief that homoeroticism—even homoeroticism presented in whitewashed, water-colored images—doesn’t belong in the picture books section of public libraries).

Higgins then asks if these librarians will be equally willing to promote "pro-heterosexuality" books:

Will they ask for young adult (YA) novels about teens who feel sadness and resentment about being intentionally deprived of a mother or father and who seek to find their missing biological parents?

Will they ask for dark, angsty novels about teens who are damaged by the promiscuity of their “gay” “fathers” who hold sexual monogamy in disdain?

Will they ask for novels about young adults who are consumed by a sense of loss and bitterness that their politically correct and foolish parents allowed them during the entirety of their childhood to cross-dress, change their names, and take medication to prevent puberty, thus deforming their bodies?

Will they ask for novels about teens who suffer because of the harrowing fights and serial “marriages” of their lesbian mothers?

Will they ask for picture books that show the joy a little birdie experiences when after the West Nile virus deaths of her two daddies, she’s finally adopted by a daddy and mommy?

Surely, there are some teens and children who will identify with such stories.