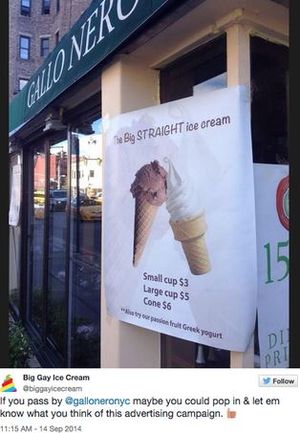 Gallo Nero, an Italian restaurant in New York City’s West Village, has begun selling a passive-aggressively flavored, “straight” ice cream seemingly in response to the Big Gay Ice Cream Shop just down the street. What makes Gallo Nero’s ice cream straighter than other ice creams is unclear, but the patrons of the restaurant are certain of Gallo Nero’s homophobia.

“They have their own way, we have our own way," a manager who asked to remain anonymous told the Gothamist when asked whether Gallo Nero’s straight ice cream was a social statement. "What's the issue? We can call our ice cream whatever we want."

Partners Doug Quint and Bryan Petroff founded the Big Gay Ice Cream Truck, a forerunner to the shop, in 2009. The shop, which is open to gay and straight customers alike, made a name for itself with its queer-inspired confections like the Bea Arthur, Salty Pimp, and Mermaid. When asked for comment about Gallo Nero’s advertising campaign, the shop’s official Twitter account responded: “No statement. We are letting New York City speak on our behalf.”