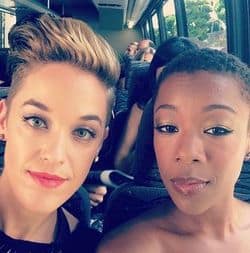 Orange Is The New Black lead writer Lauren Morelli took to Policy Mic back in May to write an open letter describing how working on the popular Netflix show allowed her to come to terms with and explore her struggle with her sexuality. Months into her marriage to Steve Basilone, a man she had dated for six years, Morelli described her personal revelation as something of a blindside that Orange helped her cope with:

"I was nervous about the first love scene I'd written for Alex and Piper. I'd loved writing it, loved watching a tenderness emerge in their relationship where passion always seemed to be the ruling principle, but by that time, I was so deep in my own self-doubt that I constantly felt like a fraud.

As I watched Taylor Schilling and Laura film the scene, one of our producers (as it happened, a gay woman) tapped me on the shoulder. She pointed at the screen and gave me a thumb's up. It was a small gesture, but my first step toward feeling accepted and quietly accepting myself. In Piper and Alex, I'd found a mouthpiece for my own desires and a glimmer of what my future could look like."

Morelli and Basilone have since parted ways on amicable terms according to details of divorced documents obtained by TMZ, and Morelli has found new romance in Samira Wiley. Wiley, known for playing Orange’s outspoken Poussey Washington, appeared hand in hand with Morelli at this year’s Emmy Awards.

“I went through it all on set: I fell in love with a woman, and I watched my life play out on screen.” Morelli explained in her letter, alluding to her budding relationship with Wiley. “And now, as we are gearing up for the release of season 2, it feels liberating and appropriate to live my life in front of you.”

Previous Post: « Towleroad Guide to the Tube #1619
Next Post: What To Watch This Week on TV: ‘Mindy’ Returns, Beyoncé ‘On the Run’ – VIDEO »