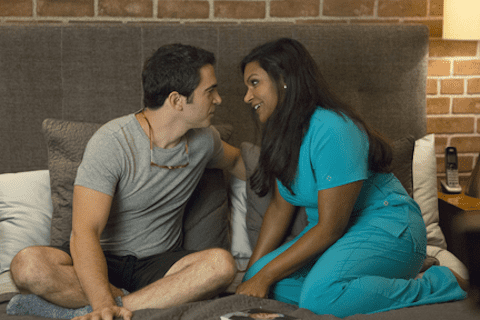 — We're beyond the "Will they?"/"Won't they?" on Fox's The Mindy Project, returning Tuesday at 9:30 p.m. Eastern, but that doesn't mean there's no trouble ahead for Mindy (Mindy Kaling) and Danny (Chris Messina). See how It's Always Sunny In Philadelphia's Rob McElhenney fits into the equation when he guest stars as Morgan (Ike Barinholtz)'s cousin, Lou.

The latest stars join Dancing, Debra Messing's back and more, AFTER THE JUMP …

— How many episodes into this season of Dancing With the Stars before Alfonso Ribeiro (Carlton from The Fresh Prince of Bel-Air) busts out his former character's signature dance move? Trick question! He's already doing it in the trailer above. The 19th season kicks off with the likes of Jonathan Bennett (Mean Girls' Aaron Samuels), Antonio Sabato Jr. and YouTube star Bethany Mota tonight at 8 p.m. Eastern on ABC.

— Find out how Jess (Zooey Deschanel) is coping with her break-up with Nick (Jake Johnson) in the season premiere of New Girl, Tuesday at 9 p.m. Eastern on Fox.

— Two of TV's favorite tropes come together on The Mysteries of Laura when the single woman trying to have it all is combined with the homicide detective cracking the case of the week. Debra Messing stars in the comedy-drama, premiering Wednesday at 10 p.m. Eastern on NBC.