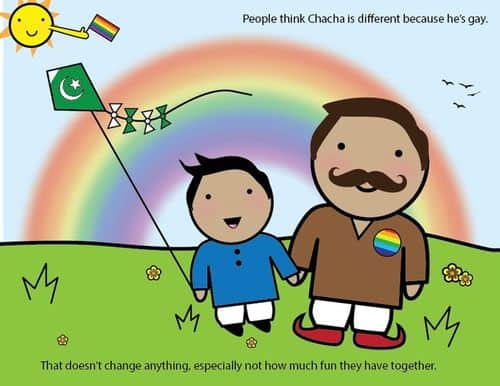 Eiynah Nice Mangos, a Toronto-based blogger and illustrator recently created a post called "My Chacha Is Gay," a story about a little boy in Pakistan and his gay uncle. The post received a great deal of attention and Eiynah began a crowdfunding campaign to turn it into a published book; she met her goal and Pakistan's first pro-gay children's book was born. "My Chacha Is Gay" has now been translated into seven different languages, though it is still unavailable in Pakistan.

“The treatment of LGBTQ people in Pakistan is incredibly unjust, as is the treatment of most minorities, or anyone that doesn’t fit the expected mould,” Eiynah told BuzzFeed in an email. “The concept of LGBTQ rights does not exist in any large-scale mainstream way. People are isolated from family, friends and loved ones over things like this. It’s no way to live… Admittedly we are not as extreme as countries like Iran in our homophobia, but that doesn’t mean the situation is not horrendous…"

“I feel there are very few resources for children in our country that are not painted with a religious brush. When I see the state Pakistan’s in, I feel like perhaps we need to start on teaching social acceptance and tolerance at a younger age. I don’t think majority of us see the urgency of doing that. If we did, things might be different,” she said.

Eiynah did not expect the book to go over smoothly in her home country, but she was shocked by the amount of vehement hatred directed at her and the fictional characters she created.

“Of course I knew that Pakistani culture/society was homophobic but since this project the extent of that homophobia has shocked me. The kinds of hate mail I get – calling for the death of Chacha, equating my book with Salman Rushdie’s “Satanic Verses”. People have literally told me I am worthy of death because I am an enemy of “god” because of this book.”

Read the simple and beautiful book at Buzzfeed, and order a copy of your own at the book's website.