A new Pew Research Center poll has some surprising findings about the American public's attitude on religion, politics, and homosexuality.

Among the poll's findings – nearly three-quarters of the public (72%) now thinking religion is losing its influence on American life and 56% of the public sees this development as a "bad thing."

The share of Americans who say churches and other houses of worship should express their views on social and political issues is up 6 points since the 2010 midterm elections (from 43% to 49%). The share who say there has been “too little” expression of religious faith and prayer from political leaders is up modestly over the same period (from 37% to 41%). And a growing minority of Americans (32%) think churches should endorse candidates for political office, though most continue to oppose such direct involvement by churches in electoral politics.

At the same time, the poll also found a decrease in support for gay marriage and an uptick in the percent of the public who considers homosexuality a "sin." 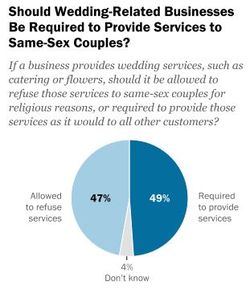 It finds a slight drop in support for allowing gays and lesbians to marry, with 49% of Americans in favor and 41% opposed – a 5-point dip in support from a February Pew Research poll, but about the same level as in 2013. It is too early to know if this modest decline is an anomaly or the beginning of a reversal or leveling off in attitudes toward gay marriage after years of steadily increasing public acceptance. Moreover, when the February poll and the current survey are combined, the 2014 yearly average level of support for same-sex marriage stands at 52%, roughly the same as the 2013 yearly average (50%).

The new poll also finds that fully half (50%) of the public now considers homosexuality a sin, up from 45% a year ago. And nearly half of U.S. adults think that businesses like caterers and florists should be allowed to reject same-sex couples as customers if the businesses have religious objections to serving those couples.

The poll has a number of other interesting (and disturbing) findings, including nearly a third of white evangelicals considering themselves minorities because of their religious beliefs and fewer Americans saying the Obama Administration is friendly towards religion.

Check out the full report AFTER THE JUMP…