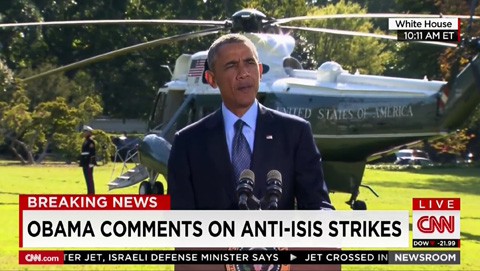 On Tuesday morning before flying to the United Nations to meet with world leaders including prime minister Abadi of Iraq, President Obama delivered a statement on the strikes begun last night against Islamic State (ISIL) targets within Syria, taken out by the U.S. and an Arab coalition including Bahrain, Jordan, Qatar, Saudi Arabia and the United Arab Emirates.

"America is proud to stand shoulder-to-shoulder with these nations on behalf of our common security. The strength of this coalition makes it clear to the world that this is not America’s fight alone. Above all, the people and governments of the Middle East are rejecting Isil, and standing up for the peace and security that the people of the region and the world deserve."