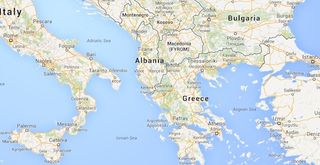 The delay comes despite a European court ruling that Greece has been discriminating against LGBT people.

Justice Minister Haralambos Athanasiou said civil partnerships had been left out of anti-racism legislation because further study was needed on how the partnerships would affect tax, social insurance and family law.

Last year, the Council of Europe's Court of Human Rights ordered Greece to pay damages to four gay couples who had taken a discrimination case against the country.

Another 162 gay couples from Greece filed a similar complaint in the international court earlier this year to pressure the government to change the law.

However, same-sex marriage remains a divisive issue in Greece, where several prominent members of the Greek Orthodox Church and members of the ruling conservative party have argued that civil partnerships for same-sex couples would undermine the institution of family.

Tom Koukoulis, one of the plaintiffs who attended the demonstration said that the legal battle is “about the right to … visit a relative in hospital, to file a joint tax declaration, and all the rest. We do think it is going to happen because we are on the right side of history."