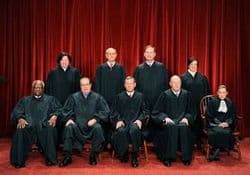 The Supreme Court has announced it will consider seven petitions from five states–Utah, Oklahoma, Virginia, Indiana and Wisconsinon–on whether those states' same-sex marriage bans are unconstitutional. The Court, currently on hiatus, will discuss the cases in a private meeting on September 29, its first conference of the year. Same-sex couples along with representatives of the states barring them from marrying have been petitioning the Court to review their cases and provide legal clarity on the question of marriage equality. USA Today reports:

By scheduling all for consideration simultaneously, the justices gave equal footing to the Indiana and Wisconsin cases just decided last week by the U.S. Court of Appeals for the 7th Circuit. The 10th and 4th Circuits previously ruled in the other cases.

The court could agree to hear one or more cases this winter; deny them all, or delay its decision for a while.

In all five states, federal district and appellate judges have agreed that state bans on same-sex marriage should be struck down as unconstitutional. But those decisions are on hold pending the Supreme Court's review.

As The Wall Street Journal points out, the Supreme Court could have more cases headed its way very soon. Many are focsued on 4 pending cases before the 6th Circuit Court of Appeals, a court some legal analysts suspect is more likely than others to uphold marriage bans: "If that happens, it’s a virtual certainty that the Supreme Court would step in and resolve the disagreement."

Previous Post: « NEWS: Batmobile, Satan, Jared Leto, ISIS
Next Post: Sam Smith Teams Up With A$AP Rocky For ‘I’m Not The Only One’: LISTEN »