No, Dylan, the Maze is not a metaphor for navigating your sudden stardom.

The last thing anyone will ever enjoy about THE MAZE RUNNER, should they be so lucky as to enjoy it, is a review describing the finer points of its narrative. Let if suffice to say that Stiles from Teen Wolf wakes up in a large glade surrounded by a huge stone maze. The only inhabitants of this sealed environment are a group of similarly aged boys, none of whom are frequently shirtless werewolves, dammit.

Why are they there?

Who put them there?

Can they ever escape?

What’s different about Dylan O’Brien besides the largest paycheck?

Will there be a sequel?

The movie shall answer all of these questions in 113 minutes! And many more. In fact The Maze Runner so loves to ask and answer questions, that it does so in literally every scene rivalling Inception in sheer expository percentages of dialogue uttered.

Since the movie loves to answer questions, TEN QUESTIONS AFTER THE JUMP…

01 Why are you using words for world building? World building, that obsession of all genre fiction, is great in novel form since you can drone on with descriptive detail for pages and pages of prose and we feel immersed. In a movie, you are supposed to replace a lot of that prose with visual learning. For example, you don’t have to explain what “runners” and “builders” are or what a "maze" is. We can guess since these are words we are passingly familiar with and we can even see some of the boys running and some building and that huge ass maze surrounding them.

02 Did you know you were upsetting the block of teenager girls behind me? Not that they didn’t love the movie. They were squealing a lot, particularly with the introduction of each character. But they vocally noted every minor detail that veered from the holy scrit (i.e. the YA novel this is based on)

03 How much did you pay the great Patricia Clarkson to waste her talent on sinister talking head exposition and literally nothing else? That was rhetorical. It wasn’t enough!

04 SPOILER ALERT Did you let Minho (Ki Hong Lee) kill that one guy just so that you wouldn’t sully the hero’s character?  And did you learn this from Disney where the villain never dies by the hero's hand but usually accidentally, by falling? Regardless of your answer thanks for putting Ki Hong Lee in so many scenes since he's the cutest Maze Runner. Sorry, Dylan. 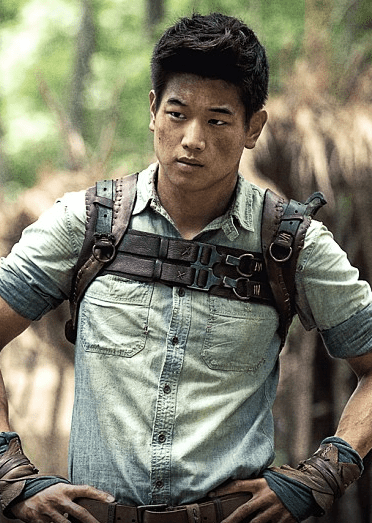 05 May I put in a request for more shirtlessness — any shirtlessness really — in the next movie? Maybe the next maze can be in a tropical setting? Or maybe Minho could accidentally have his shirt ripped off in an action sequence.

06 Why are there no homosexuals OR heterosexuals in the future? These guys have lived together in the glade for years and none of them are even FWBs. And they don’t show any interest when Teresa (Kaya Scoledario), the only girl they’ve seen in years, arrives either. No sex in the future? Talk about a dystopia!

08 Have none of these characters ever read Lord of the Flies? They are remarkably well behaved, self-policing and orderly for teenagers left to their own devices for years on end.

09 Regarding the ending: Are you for real? What a load of bollocks! (I’m allowed to use British slang because Teresa suddenly and inexplicably has a British accent in the middle of that one scene) The ending monologue doesn’t even make sense in context.

10 When does the sequel come out? Asking for a friend.