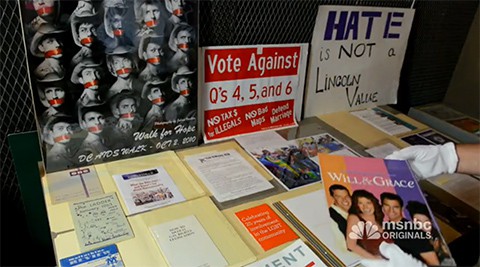 Last month, we told you that the Smithsonian Institute was expanding its collection of artifacts pertaining to LGBT history. Included in that expansion were props and memorabilia from the seminal sitcom, Will & Grace. Said Katherine Ott, Curator at The National Museum of American History, "We thought [Will & Grace] would be a great show to collect from. The topics that came up in the shows and the characters were far more complicated and really grounded in the culture of that time."

Speaking as to why it's important to preserve these artifacts, Franklin Robinson Jr., Archives Specialist at The National Museum of American History, remarked, "

Years ago nobody would have bothered with this material. But that was just a reflection of society. So 50 years from now when LGBT civil rights will be something that we don't even think about, people will ask, 'well, what was the big deal?' And you can say, 'here it is.' This is the primary materials from which history will be written. And if you don't save it now then it's gone.

Take a tour of the LGBT artifacts at the Smithsonian, via MSNBC, AFTER THE JUMP…