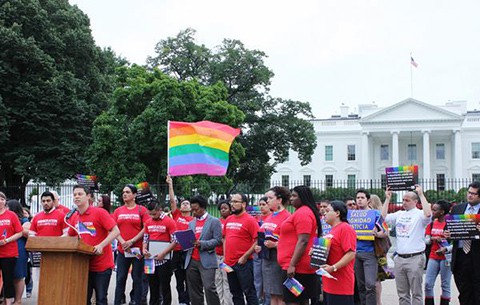 A group of LGBT immigrants rallied in D.C. Tuesday to protest the federal government's immigration policies in light of news that President Obama will not make a move on immigration reform until after Election Day, The Washington Blade reports.

Protestors wore red shirts that read "Immigration is an LGBTQ Issue," encouraging people to consider the intersections between these two political issues.

A 28-year-old gay man, "Oliver" (pseudonym), shared his story of fleeing Nigeria to escape homophobia. In light of recent laws in Nigeria, he cannot return to his country, so "Oliver" spoke on the importance of maintaining America's asylum system.

Two pseudonymous speakers shared horror stories of being placed in America's detention centers, a man "Jose" and a transwoman "Fernanda."

"Jose" originally fled El Salvador for being sexually abused an harassed based on his sexuality. Of the detention center, he said:

"Fernanda" is 36, and fled violence she faced in her home country of Honduras. At the protest, she described her experience in a detention center, where she was placed with mentally ill people.

It is time for this country to turn our attention to understand the stories of trans woman in detention who are mistreated psychologically, verbally, who are repeatedly assaulted and attacked for being who they are.

Check out video of the rally, AFTER THE JUMP…

Previous Post: « Out PA Lawmaker Brian Sims Rappels Down Building In Philadelphia: VIDEO
Next Post: ‘Will & Grace’ At The Smithsonian: VIDEO »