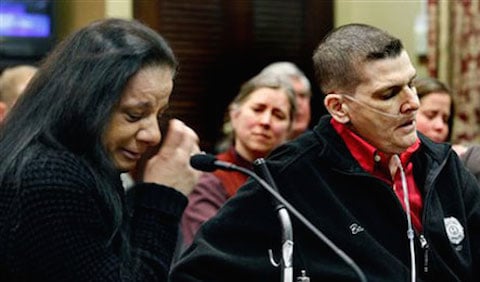 The litigation was filed by GLAD in the U.S. District Court of Rhode Island on behalf of 56-year-old Deborah Tevyaw, who was denied spousal disability benefits and a lump sum death payment from the Social Security Administration (SSA). In 2005, Tevyaw was married in Massachusetts to Patricia Baker. Baker died in 2011 following a battle against lung cancer. In her final months, she lobbied for the legalization of gay marriage in Rhode Island, testifying on the issue before the state Senate.

However, despite the legality of the marriage, Tevyaw was denied benefits upon her Baker’s death. The SSA at first asserted the Defense of Marriage Act (DOMA) blocked her from receiving benefits. However, even after the Supreme Court ruled Section 3 of the law was unconstitutional, the SSA allegedly continued to deny Tevyaw benefits on the basis that Rhode Island wouldn’t have recognized her marriage at the time of Baker’s death.

Tevyaw has since been living on a monthly income of $732 and was forced to sell her home she owned for more than 38 years because she can’t afford the mortgage.

In a statement, Tevyaw said:

“I’ve lost my wife and my best friend, and Social Security has made that so much worse by telling me that in their eyes, I was not Pat’s wife. Not only is that hurtful and insulting, it has meant that I am living in poverty. I am not looking for a handout; this is money that Pat earned through hard work.”

The lawsuit also notes Rhode Island Gov. Lincoln Chaffee’s executive order on May 24, 2012 recognizing out-of-state same-sex marriages and contends the directive should apply to Tevyaw’s marriage even though Chaffee signed it before Baker’s death.

SSA spokesperson William “BJ” Jarrett said the agency agrees the issue behind the lawsuit “deserves additional consideration. He added that the SSA plans to review its policy manuals based on analysis of Rhode Island state common law.

Watch a 2012 interview with Tevyaw and Baker, AFTER THE JUMP…

Previous Post: « Philly Gay Bash Victims Speak Out For the First Time Since Attack: VIDEO
Next Post: ‘Barbie Boy’ Is A Heartbreaking Exploration Of Gender Identity And Childhood – WATCH »