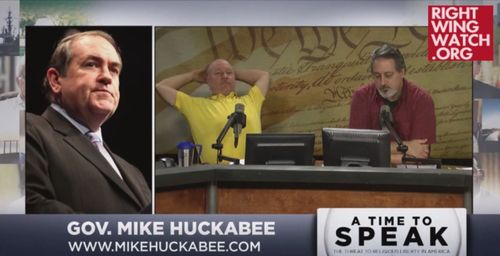 Former Arkansas Governor and longtime opponent of LGBT equality Mike Huckabee phoned in on American Family Radio's Today's Issues program earlier this week to blast the Republican Party's largely nonexistent reaction to the Supreme Court's gay marriage decision on Monday (only a handful of GOP congressmen spoke out, no statement was released by the RNC, and chairman Reince Priebus reiterated this week that gay marriage will not be a major issue during this year's midterms.)

I'm utterly exasperated with Republicans and the so-called leadership of the Republicans who have abdicated on this issue when, if they continue in this direction, they guarantee they're going to lose every election in the future…and if Republicans want to lose guys like me and a whole bunch of still God-fearing, Bible-believing people, go ahead and abdicate on this issue and while your at it go ahead and say abortion doesn't matter. Because at that point, you'll lose me. I'll become an independent. I'll start finding people that have guts to stand. I'm tired of this.