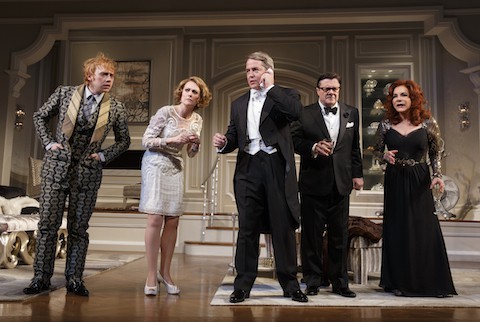 Anyone who thinks theatre people are a bunch of eccentric, egotistical, navel-gazing kooks will find little to prove them wrong in the starry Broadway premiere of Terrence McNally’s 1982 comedy It’s Only a Play, which opened last week at the Schoenfeld Theatre. Directed by Jack O’Brien, the backstage farce meets drawing-room play takes up with a team of show folk anxiously awaiting reviews on opening night. 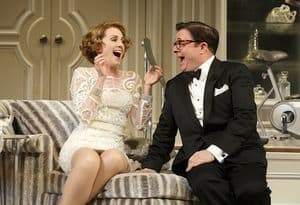 If you’re determined enough to snag tickets to the nearly-sold-out run, you’ll find its crowded marquee of big names, including Matthew Broderick, Nathan Lane, Stockard Channing, Megan Mullally and F. Murray Abraham, preening around the opulent interior of an upper east side townhouse, wringing their hands over the trials of mounting a play and goosing the audience with an exhaustive litany of de rigueur insider jokes and name drops.

The bedroom of this lux abode (lavishly designed by Scott Pask) belongs to theatre producer Julia Budder (Ms. Mullally), and tonight it’s doubling as a coat room for the opening party of her first big Broadway venture. Peter (Mr. Broderick) wrote the play’s lead role for his friend James (Mr. Lane), who turned it down to continue his stint on a mediocre sitcom and has flown in to make sure he didn’t pass on a hit. 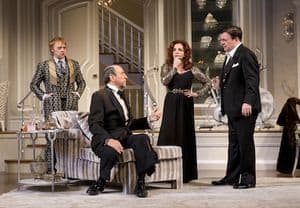 The play’s leading lady Virginia (Ms. Channing) is a pill-popping star out on parole (complete with security anklet) and its British director Frank (Rupert Grint) is prickly, bizarre and apparently brilliant. A predatory critic is also on hand to generally antagonize all (Mr. Abraham), and the coat check boy (an aspiring actor, of course, played by Micah Stock) is charged with the running gag of schlepping outerwear for increasingly outlandish guests (Shia LaBeouf! The cast of The Lion King! Lady Gaga!).

Lane and Channing are both a delight, incidentally as caricatures of their own profession. Mr. Lane’s animated ease and precise comic timing make light work of his many rapid-fire one-liners. Ms. Channing is spot on as the industry-weary grand dame, all sharp-tongue and taut-face.

With a mild southern drawl and coiffed wig, Ms. Mullally doesn’t cut quite as extreme a figure as some of Broadway’s more eccentric producers. And while charming, Mr. Broderick seems a bit dazed—even as a playwright facing reviews on opening night. He’s also saddled with thanklessly delivering McNally’s sentimental odes to the art form, the sincerity of which seem stodgy and out of place. 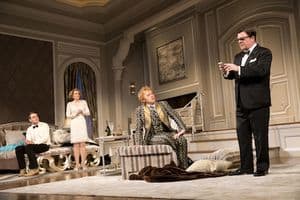 In updating the original script for this production, McNally has packed it to the gills with jabs and winks aimed at celebrities big and small—with audiences invited to listen in on the fun (show people sh*t talking behind the scenes!). But like most opening night parties this one is relatively uneventful, aside from people waiting around for reviews to come in and reacting when they do. The rest of the play is taken up with the artists’ neuroses (at their most stereotypical) and these often backhanded zingers.

Much of McNally’s humor is low-hanging fruit (spoiler alert: the cast takes a group selfie), and much of the story (such as it is) gets buried in it. Though often funny, the players in McNally’s satire are gleefully narcissistic—and no more sympathetic than the critics they delight in vilifying. The play (like the play within the play) is obsessed with its own critical reception, though it's hardly clear why when the names above its title are enough to ensure box office gold.

Previous Post: « Lorde Takes South Park Ribbing In Stride, Calls Sia Out For Impersonating Her – VIDEO
Next Post: Take A Look Inside ‘Wonderkid,’ A Short Film Aimed At Tackling Homophobia In Sport: VIDEO »