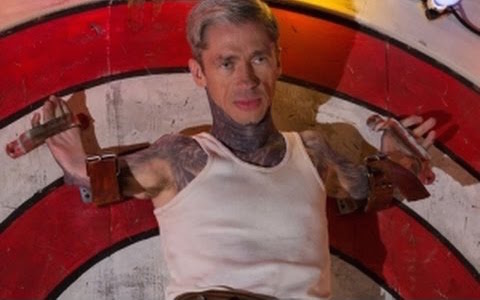 OK, so a bit of a lull this week on American Horror Story, no? Some interesting pieces are being moved into place, but on its own, tonight's installment felt like a bit of a set-up episode.

It was great to spend some time with Paul (Matt Fraser) tonight. He gave an incredible performance, and I hope we see more Fraser on our screens soon.

Something I'd like to see a lot less? These sort of fantasy sequences we keep getting, especially from Stanley (Denis O'Hare) and Esmerelda (Emma Roberts). I think they're jarring, and, while the first one was a fun sort of bait and switch, it's just starting to feel like a way for AHS to show something shocking without committing.

Despite lacking some of the punch of other episodes, there's still lots to discuss. Spin the wheel and catch up, AFTER THE JUMP …

Love is in the air all over Jupiter. Even our poor, twisted Dandy (Finn Wittrock) has been bit by the lovebug. He’s smitten with Bette and Dot (Sarah Paulson). His mother, Gloria (Frances Conroy) is less enamored by the twins. She offers Finn a silver platter of prophylactics so that he won’t further dilute the gene pool that’s already been tainted with so much in-breeding. Dandy is mortified that she would suggest he is using the twins for sex. He’s in love with them! They’re going to get married!

Bette definitely seems on board with this whole plan. She loves shacking up at Chateau Mott and all the fancy caviar she can stomach. Predictably, Dot is not into it. Sure, they aren’t beaten or kept in chains, but she still has to suffer through Dandy’s boring stories and general creepiness. He’s so in love with them, but Dot is just biding her time until she can milk enough Mott money from Dandy to get the operation that separates her from her sister. The sisters continue to collect their private thoughts in their diaries. They even maintain a pact to not look at the other’s diary or listen to her thoughts while she writes. All their most private feelings go in there.

That’s too much for Dandy to handle. He’s not exactly a personal boundaries kind of guy. So he volunteers a game. Let’s all tell secrets! Dandy will even go first! He tells them that it was he who stopped the killer clown while Jimmy (Evan Peters) was unconscious. Psshh. Dot knows Jimmy wouldn’t lie about something like that. Her suspicions begin to infuriate Dandy. When she won’t play the game and share a secret, he goes into full rage tantrum.

Later, his mother finds him in tears after breaking into Dot’s diary and reading all the terrible things she had to say about him. Being with freaks like them was the only thing to make him feel normal. Now he knows he’s not meant for love. He’s meant to bring to death.

Back at the campgrounds, everyone’s getting ready to celebrate Fraulein Elsa (Jessica Lange)’s birthday. Ethel (Kathy Bates) makes some mutterings about where those twins ran off to, but Elsa poo-poos it, saying the twins snuck away when she took them dress shopping. When the festivities begin and the performers start sharing their gifts, there are more mutterings about the Tattler Sisters’ strange disappearance. Elsa plays it real cool. GUYS IT’S FINE, THEY RAN OFF, LET’S STOP TALKING ABOUT IT, IT’S NOT AT ALL WEIRD THAT I’M GETTING SO EASILY UPSET ABOUT THIS QUESTION, SO STOP MAKING IT A THING. IS IT HOT IN HERE? IT IS, RIGHT? WHEW. WHERE WERE WE? OH, YES, MY BIRTHDAY.

So the performers keep showering Elsa with gifts, including Ma Petite (Jyoti Kisange Amge), whose gift is basically her sitting inside a crocheted snuggie as a tiny human hot water bottle. The best gift is probably from Paul the Illustrated Seal (Fraser), who gives one of my favorite gifts, the gift of the schwanz. That’s right, he’s schtupping the fraulein. When they finish, he leaves her with her Ma Petite pillow pet (which is weird, because it seems like she was there in the room the whole time they were schtupping).

But where is he heading? Why, he’s going to visit the candy striper (Grace Gummer). After that scandalous romp they had way back in episode 1, he just can’t get enough. They’re in love! Just don’t tell her crazy overprotective daddy!

Paul stops at the local pharmacy to pick up some of the candy striper’s favorite perfume, but he runs into Dandy buying supplies for the twins. Paul’s no dummy, and there are only so many explanations why Dandy — who tried to buy the twins before — would need two sets of girls’ beauty products, including headbands. When he gets back to camp, he tries to share his suspicions with Jimmy, but the lobster boy is having none of it. Elsa saved them; she wouldn't do something so terrible.

Back in Elsa’s room, she finishes serenading Paul and is ready for the schwanz, when he tells her there will not be schtupping this evening. He leans in for a goodbye kiss and she can smell the candy striper’s perfume on him. While it’s all coming out, he tosses out that there’s a going theory that she did something awful with the twins. Incensed that the performers would dare not trust her completely, she demands they all wake up immediately and join her in the tent. 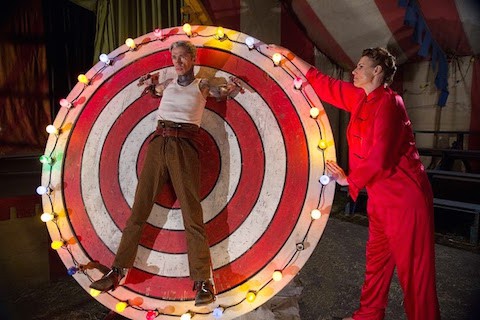 Once they’re gathered, she launches into a big HOW DARE YOU speech about everything she’s done for them. The conclusion is basically I need you to prove you trust me, and what better way to do that than hop on this convenient wheel where I can strap you down and throw knives at you. Paul volunteers as tribute. Elsa’s first two knives miss him, but the third lands right in his gut. She “acts” as if it was an accident, but, come on, she could hardly contain the smirk when the blade sunk in. She even says she’ll call the doctor.

Later, no surprise, no doctor has arrived, BUT the candy striper is here. All the excitement is enough to arouse Jimmy’s suspicions.

Perhaps their heightened tension is what’s distracting everyone from taking a closer look at Esmerelda (Roberts). Stanley (O’Hare) wants her to lure Jimmy away so they can chop off his hands for the museum. She’s not really feeling that plan and instead offers to capture the much more portable (and less messy) Ma Petite. Too bad Ma Petite is just too damn lovable, and when it comes time to drown her in a large jar of formaldehyde, Esmerelda can’t do it. Instead, she convinces Jimmy to run away with her. He’s just got a quick errand first (more on that in a bit). None of this pleases Stanley, who tells Esmerelda in no uncertain terms that they are back to the original plan — cut off Jimmy’s hands.

That may end up preferable considering the handsome, young Darling finds himself on the doorstep of Dandy Mott. Convinced that Paul may have been on to something about the twins, he’s turned up to do some investigating. If Dandy is planning on stabbing him, can he at least strip down to his briefs with him first? Please? 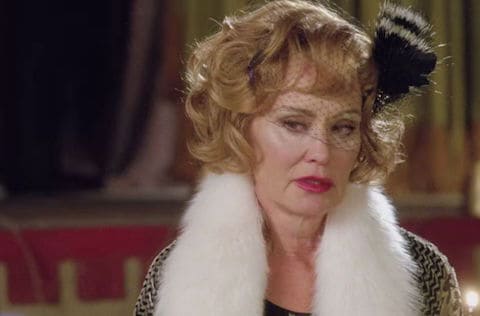 Elsa’s terrible, horrible, no good, very bad birthday is coming to an end back in the tent. Ethel brings her a piece of her birthday cake while Elsa tells her a sad story about her older sister who died as an infant. It destroyed her parents. Even though they may have thought Elsa would make them feel better, she just reminded them of what they lost. Now, she looks at Ethel as a sister. That’s so nice! But, Ethel reminds her, if she ever finds out Elsa has been lying to her, she will kill her with her bare hands. Great! Happy birthday, Elsa! Now make a wish! Elsa, of course, wishes to be loved, in case that wasn’t already a painfully obvious aspect of her character.

Which liar is going to get theirs first: Elsa, Stanley or Dandy?