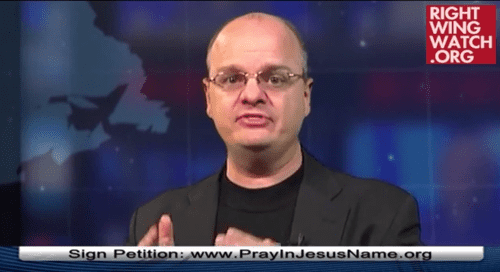 Former Navy chaplain Gordon Klingenschmitt will be taking his special brand of anti-gay nuttery to the Colorado State Capitol starting next year – having been elected to the state house in Tuesday's election.

In response to Klingenschmitt's victory, Right Wing Watch has compiled a list of some of his more radical views.

You can also check out the headlines for the past four Klingenschmitt-related stories we've posted here on Towleroad to highlight how scary nuts this guy is:

Gordon Klingenschmitt: Gay People 'Want You To Disobey God So You Go to Hell With Them"

Gordon Klingenschmitt Warns Christians Are Being Forced to "Worship Sodomy"

And while it's possible voters were unaware of Klingenschmitt's more incendiary anti-gay rhetoric, the scarier alternative is that perhaps voters were aware of all this insanity and honestly believe he's the best candidate to represent the district's 'values' in Denver…