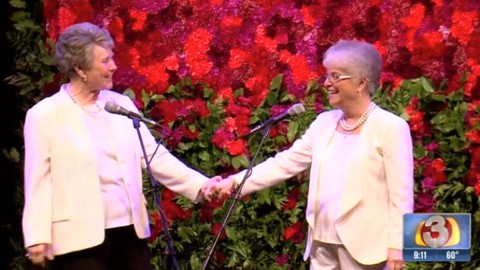 When they met in their college dorm in Texas in 1957, Nelda Majors and Karen Bailey never dreamed of telling anyone they were gay — let alone getting married.

In fact, Majors and Bailey didn't come out publicly until they'd been together for 50 years — when they were inadvertently outed by lesbian Houston City Councilwoman Sue Lovell during an inauguration ceremony.

After almost 57 years together, Majors and Bailey finally celebrated their marriage at the Orpheum Theater in downtown Phoenix on Sunday.

Majors and Bailey, who have two daughters, spent most of their lives in Houston, but retired to Arizona.

They were among the plaintiffs in a federal lawsuit challenging Arizona's marriage bans, which were struck down in October. They also were among the first couples to receive marriage licenses.

Majors and Bailey invited the public to the ceremony on Sunday, and hundreds showed up.

"They feel that 56 and a half years together is a long engagement, but today they now have 1,134 federal laws on their side to protect their relationship," the officiant said. …

Watch the report, along with a 2012 video of the couple talking about their relationship, AFTER THE JUMP …