In a speech to the New South Wales Legislative Council today, Australian Liberal MP Don Harwin has revealed that he is gay

In a speech to the New South Wales Legislative Council today, Australian Liberal MP Don Harwin has revealed that he is gay, reports the Sydney Morning Herald. 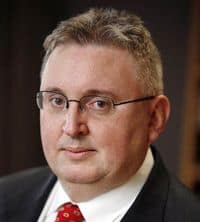 Harwin, the president of the upper house, came out in a Christmas message on the last sitting day of Parliament for the year.

In the emotional speech, Harwin said he rejoiced in the opportunities available to young gay and lesbian people today:

"Life is so different for them than it was for me. Much has been achieved since then, and perhaps my travails in less happy times gave me the determination I needed to pursue this role."

"It is remarkable how quickly public opinion has shifted and, indeed, our house has voted to support marriage equality in principle. I hope that my many friends who are waiting for the opportunity to marry will not have to wait too much longer for the Commonwealth Parliament to reform the law."

Following the speech, Harwin said he has been out to parents, friends, and work colleagues for almost 20 years. Harwin joins Labor's Penny Sharpe and Helen Westwood, Liberal Bruce Notley-Smith and independent Alex Greenwich as one of the few out politicians in New South Wales.