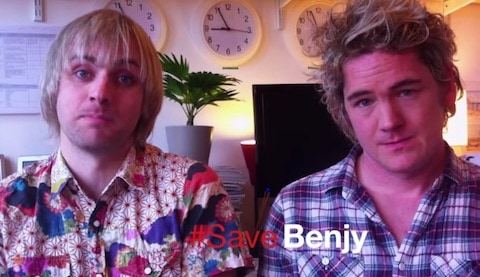 An Irish animal rights group has launched a campaign to save a gay bull from the slaughterhouse, reports Pink News.

A farmer in County Mayo bought the bull for breeding last year but was left disappointed when he he realised that Benjy is more interested in other bulls.

“At first I didn’t take seriously that the bull could be gay, but after seeking advice I know this can happen. The bull is now too old to castrate and turn into a bullock so I will keep him for the factory.”

However, when Animal Rights Action Network (ARAN) highlighted Benjy’s plight, TheGayUK launched a crowdfunding campaign to save his life.

With 23 days left, the campaign has so far raised nearly $6,000 and an animal sanctuary in England has offered to care for Benjy for the rest of his life.

“The plight of little Benjy is hitting the hearts and households of Irish society with the reality of what will face this innocent boy if someone somewhere doesn’t step in. As a gay man myself, I know only too well what it is like to be treated indifferently, that’s why I hope we can give Benjy a second chance in life whilst helping to bring attention to the problems facing all gay people everywhere around the world, and of course the many other Benjy’s that are brought to slaughter on a daily basis who are not so lucky.”

Previous Post: « ‘Dragon Age: Inquisition’ Video Game Banned in India Over Gay Sex Scenes
Next Post: Norwegian Whale Watchers Get the Surprise of Their Lives When Pod of Humpbacks Surface Near Boat: VIDEO »