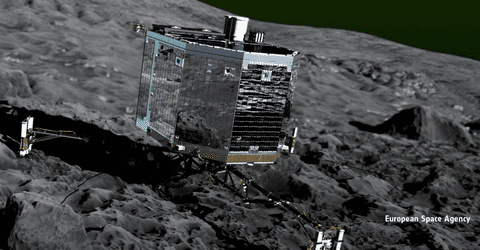 The European Space Agency will (hopefully) make history tomorrow with the perilous, first-ever landing of a man made probe on a comet some 300 million miles from Earth.

In 2005, NASA made first contact with another comet when it slammed its Deep Impact craft into Tempel 1, ejecting material that scientists were able to study. Later that same year, the ESA launched its much more ambitious Rosetta spacecraft on a nearly 10-year trip to rendezvous with a dumbbell shaped comet, 67P/Churyumox-Gerasimenko. The unmanned craft made the news in August when it finally caught up with the comet, joining it in an irregular orbit.

But the real action will start early Wednesday morning when the main craft ejects a landing pod called Philae (pictured above) that will make an intricately plotted, 7-hour descent to the comet's rapidly spinning surface, which should end with touchdown at 11:00 AM EST. If all goes well, the pod will claw into the comet with drills that will keep in place for 3 days of intensive study of the celestial body before its batteries run out.

ESA will be streaming all the tense action from mission control if you want to follow it live as it happens…sorta. The comet is so far away that radio signals take 27 minutes to travel back to Earth. For a more dramatic take on the mission, you can check out Rosetta's very Hollywood-style "trailer," which rivals the outer space action (and pounding score) in Interstellar.

You can watch it AFTER THE JUMP…