It's always a shame when a celebration that's supposed to bring the LGBT community together — Pride — ends up dividing us. Or perhaps it's just that Pride has a tendency to expose existing divisions, especially given that major corporate dollars are involved.

In any case, it's now happened in several of Texas' major cities over the last few years: in Austin, prior to the formation of QueerBomb in 2010; in Dallas, during a dress-code flap last year; and now in Houston, where black LGBT activists are outraged that next year's Pride parade is scheduled for the weekend of Juneteenth — a nationally recognized holiday that commemorates the end of slavery in the US.

Last Month, when Pride Houston Inc. announced it was moving Texas' largest gay Pride parade downtown, saying it had outgrown the city's Montrose gayborhood, organizers were criticized for not soliciting community input prior to the decision.

Now, Pride Houston is facing an arguably much bigger PR problem: In addition to moving the parade downtown, they moved the parade up a week and away from the anniversary of the Stonewall Rebellion to eliminate any conflict with the July 4 holiday. But the new schedule also means that the Pride parade, set for Saturday, June 20, will directly conflict with Juneteenth, officially on June 19 but celebrated throughout the weekend.

Houston black transgender blogger Monica Roberts [pictured below] writes at TransGriot that Pride Houston's decision threatens to drive a wedge between the city's African-American and LGBT communities, whose relationship has already been strained by an ongoing fight over the city's Equal Rights Ordinance. 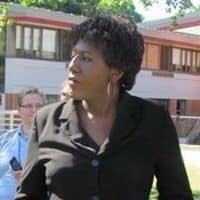 They will see this as another slap in the face to the Houston Black community and I predict it will be spun by the haters as an attempt by the gay community to "hijack Juneteenth."

With this boneheaded decision, which is a sadly predictable one from an organizational board that is predominately mono-racial and insular in its thinking, PRIDE Houston has just unnecessarily set off some drama that will only inflame the homophobic animus elements of the Houston Black community have for the LGBT community.

It is an animus that Dave Welch, the sellout pastors of the Baptist Ministers Assn. of Houston and Vicinity will eagerly pour gasoline on as the Black LGBT community shakes its head and gets out of the middle of the coming public relations nightmare between these two groups.

Meanwhile the Texas Republican Party and conservative movement foot soldiers will be smiling as they observe their plan working to drive a wedge between key members of the Houston liberal progressive coalition in the African-American and LGBT communities.

"There have been previous instances where the Houston LGBT Pride Celebration has fallen on the third weekend in June around the 20th of the month and similar requests were not made during those instances," Pride Houston President and CEO Frankie Quijano wrote in the letter. "Furthermore, a substantial amount has already been invested into the Houston LGBT Pride Celebration for its current date that would un-recoupable which can be crucial for any non-profit organization."

In a follow-up post, Roberts responds that Houston's Pride has never been held so close to Juneteenth, and she lists the dates of the parade going back to 1994. According to Roberts' post, the closest to Juneteenth the Pride parade has been held is June 23 — on three occasions.

Black LGBT activists and others are expected to again air their concerns during an open forum hosted by Houston Pride tonight starting at 7pm CT.

Here's hoping they can work it out.