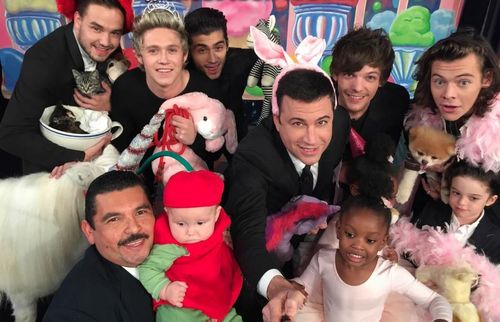 The boys of One Direction stopped by Jimmy Kimmel Live the other night to help Kimmel take the "Cutest Selfie Ever." Kimmel enlisted the help of the teenage heartthrobs, but the host felt the boys alone weren't cute enough; cue the reinforcements of puppies, teacup kittens, tiny ballerinas, stuffed animals, a unicorn and even Guillermo himself to capture the most sickeningly sweet selfie ever.

Even Louis Tomlinson appeared in good spirits on the show considering he angrily tweeted a UK reporter last week for insinuating the singer is gay in a tweet the reporter posted. However, it was Niall Horan who decided to go diva this week, donning a tiara from Kimmel's prop box;

Watch the boys mug for the camera AFTER THE JUMP…