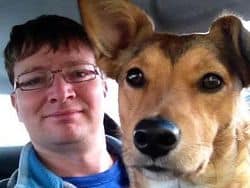 Wright previously served as senior editor of the LGBT newspaper Dallas Voice and has worked as a news reporter and editor for several mainstream publications.

Wright graduated from the University of Florida with a degree in journalism. He and his partner, Donald M. Christie III, are the proud fathers of a corgi-dachshund mix (they think) named Balynn (shown).