A Texas judge has ordered the city of Houston to stop offering health and life insurance benefits to same-sex spouses of married employees, the Houston Chronicle reports: 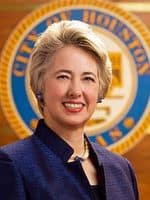 Days after being elected to her third and final term last November, Mayor Annise Parker announced Houston would extend employment benefits to the spouses of all married employees, gay or straight. It would be a liability for the city to enforce an unconstitutional ban on such benefits, she said, following the U.S. Supreme Court's ruling last summer that the federal Defense of Marriage Act is unconstitutional.

State District Judge Lisa Millard quickly signed an order preventing the city from offering the benefits, but that order was lifted in January after the city moved the case to federal court. […]

Jared Woodfill, a conservative activist who filed the first lawsuit against the city, filed another lawsuit last week, again asking Millard to stop Parker from issuing benefits to same-sex couples. As she did in January, Millard agreed to issue a temporary injunction Wednesday.

A spokeswoman for Parker said the city is preparing an immediate appeal that would allow the benefits to remain in place.

The city is also currently embroiled in a legal fight over its non-discrimination ordinance protecting LGBT Houstonians from discrimination.