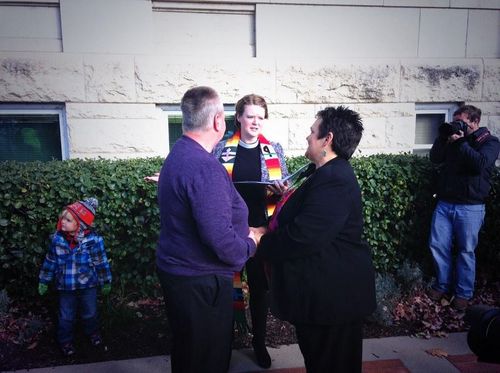 Yesterday, the Supreme Court denied Kansas' request for a stay on a lower court ruling striking down the state's gay marriage ban and today same-sex couples across the state have begun tying the knot.

The Associated Press reports same-sex marriages taking place in at least four counties: Douglas, Sedgwick, Cowley, and Riley. Other counties, however, are waiting on word from the Kansas Supreme Court before they take any action.

In the state most populous county, Johnson County, Court Clerk Sandra McCurdy said about 70 applications from same-sex couples are pending.

"Until I hear something from the Kansas Supreme Court, I'm not issuing any marriage licenses," McCurdy said Wednesday.

Earlier today, Kansas Governor Sam Brownback pledged to continue defending the state's gay marriage ban and Attorney General Derek Schmidt said the SCOTUS marriage decision applies to only Douglas and Sedgwick counties. The ACLU, however, maintains that the ruling applies in all 105 counties.

In the meantime, check out more photos and video of the historic day, AFTER THE JUMP…