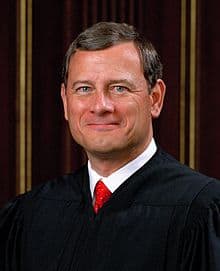 South Carolina's Attorney General Alan Wilson, who has long been entrenched in his battle against attempts to end the state's discriminatory ban on same-sex marriage, is seeking a stay of U.S. District Judge Richard Mark Gergel's ruling that struck down the Palmetto state's marriage ban as unconstitutional from none other than U.S. Supreme Court Chief Justice John Roberts. Just yesterday, the Fourth Circuit Court of Appeals denied a similar appeal made by Wilson. Now, as BuzzFeed reports, all eyes turn to Roberts and whether the 6th Circuit's move to uphold same-sex marriage bans and the subsequent appeals by plaintiffs in those cases will sway Roberts to intervene:

Since the justices turned down five states’ requests on Oct. 6 to take a marriage case appeal — including a decision from the 4th Circuit striking down Virginia’s marriage ban — the justices have, on three occasions, turned down requests to issue stays of lower court rulings during appeals. This includes one, in Kansas, since the 6th Circuit Court of Appeals upheld four other states’ bans.

Now, however, with requests in from the plaintiffs in those four states’ cases asking the Supreme Court to take one or more of the appeals and resolve the question, Wilson is hoping that he can get a stay issued from the court to stop the trial court ruling from going into effect Thursday.

Specifically, South Carolina is asking the chief justice to grant a stay pending appeal because, the filing asserts, the 4th Circuit Court was wrong in its decision in the case challenging Virginia’s marriage ban, Bostic v. Schaefer, which the Supreme Court let stand on Oct. 6.

Same-sex marriage is set to begin Thursday at noon in South Carolina should a stay not be granted.

Read the appeal filed by Wilson, AFTER THE JUMP…